Many thanks to all the helpers, including four kids. Actual kid's quote: "Planting trees is fun!" 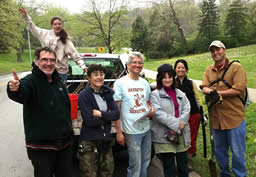 Part of the crew on May 5th 2013. Some had already left and some had yet to arrive.Native trees and shrub seedlings were donated to Roanoke Park by the Missouri Department of Conservation. One of the species (persimmon) wasn't looking healthy on planting day so we skipped those. After all the solid efforts, only nine of the donated trees remained unplanted. 131 got planted. See the planting plan of their locations (168kb pdf).

The seedlings are scattered in the park and marked with yellow flags. Feel free to water if they look like they need it or pull weeds from around them. We'll be trying to get mulch moved around most of them and may visit with a watering truck if we hit a dry spell.