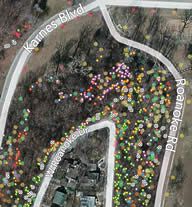 The Roanoke Park Tree Inventory on ArcGIS.com: http://tinyurl.com/RP-Trees-2012 Click above to see how it works, then go try it yourself.A grand total of 2,100 trees in Roanoke Park were identified, assessed and mapped! The online master map is still being finalized and trees are being chosen for the "Interactive Tree Walk." Thanks to the Missouri Department of Conservation for awarding the T.R.I.M. grant to the Roanoke Park Conservancy.

Please explore the main ONLINE ROANOKE PARK TREE INVENTORY MAP. Click the image at right to better understand the map interface, then click the link above.

As a snapshot of our little slice of nature, the table below shows how many of each kind of tree in the inventory. You can also look at expanded data by downloading an excel spreadsheet: RoanokeTrees.xlsx.

All categories above are native except as noted.

Hawthorn: The ones in front of the community center are nursery cultivars. Others are wild type. Exact species and/or cultivar unknown.
Black Locust: Originally native to southern Missouri, black locust has spread across the country. It is not considered a favored species for the Kansas City area by the Missouri Department of Conservation since it can become invasive to prairie and glade habitats.
Mulberry: Red Mulberry is Native, White Mulberry is from Asia. "Mulberry" (identified generically) may be red/white hybrids.
Honeylocust: Some of the park's honeylocust are wild type, with thorns. Some are thornless cultivar street trees, planted by the city.
Broadleaf Deciduous Small/Medium: These are generic tree inventory designations. Native status not specified.

These results and the tree inventory GIS data have been shared with local biologists and foresters with the Missouri Department of Conservation and the KCMO Parks Department. Many comments were generated about the results, how our forest came to be as it is, how to manage it in the future, and varying opinions about the value of certain species:

A surprising diversity of trees was identified by the tree inventory: over 45 species! Most of these are native to Kansas City, or at least elsewhere in Missouri.

Larry RIzzo commented, "This is actually quite an impressive variety. It ranges from dry-site species like Chinkapin Oak, to mesic (wetter) species like KY coffeetree & Basswood –I’m sure this is a reflection of the aspect of the slopes. You also have bottom species like Cottonwood, Boxelder, Silver Maple and Sycamore."

The park's most populous oak is Chinkapin Oak, loved for it's gnarly branches full of character. The largest Chinkapin Oak in the metro area lies just east of the park in the Roanoke neighborhood at the southwest corner of 37th & Wyoming.

The tree inventory identified about a dozen "critical maintenance trees." The parks department was alerted and these trees have been pruned (or will be soon), making the park SAFER. You can download maps of these trees: CriticalTreesRoanoke.pdf (984kb).

Also on the maintenance front, the inventory identified the park's Ash trees, allowing the city to decide how these will be incorporated into the city's response to Emerald Ash Borer. Another map was created to show the 81 Ash trees in the inventory with a layer color coded for Condition, and a duplicate layer with symbols coded for size. View the map here: Ash Trees in Roanoke Park.

All the experts agreed that we were on the right track to attack the shrub honeysuckle and other non-native invasives. Without winning the battle there, discussions about the ideal balance of trees in the park are pointless.

The park's second most populous tree is non-native invasive Ailanthus, "Tree of Heaven." All agreed that this Asian import should be weeded out over time. Wendy Sangster of the Missouri Department of Conservation agreed that targeting the seed producing (female) trees in the park first is a good idea to prevent new seedlings. MDC personnel were fairly adamant that the invasive buckthorn trees should also be removed. Arborist Ivan Katzer was more sanguine. Norway Maple was less of a concern to the experts, since it hasn't proven to be particularly aggressive here yet. On the other hand, the fact that the inventory found more non-native Norway Maples than all native maples combined seems to indicate a problem.

Most agreed that we have an over-abundance of Hackberry, at 33% of the inventoried trees. Foresters generally try to manage toward no more than 10% of a given species although the area they're managing is much larger than one park. Early results from a not yet released i-Tree ECO random survey of the nine county area showed 17% hackberry in Jackson County, second to American Elm at 32%. 17% is more than the rule of thumb 10% but half of the percentage of hackberry we have dominant in Roanoke Park. It is speculated that the removal of fire from the ecosystem and the park's former condition of being overgrown with shrub honeysuckle favored the shade-tolerant hackberry seedlings at the expense of less shade-tolerant species such as oaks. All agreed that hackberry was a fine tree, helping to prevent erosion on our steep slopes, and providing good wildlife value and that managing against shrub honeysuckle and Ailanthus trees should provide room for more oaks.

American Elm ranks as the parks #2 native tree, despite the general impression that these were all killed off by Dutch Elm Disease. Not so. They just aren't as pretty and big as they would have been. Redbud and American Basswood (Tilia americana) are next, with the latter holding its own against all the masses of European Basswoods (Tilia cordata) planted as street trees in Kansas City. Only two Tilia cordata were identified within the park by the inventory.

Eastern Hophornbeam, a tree many people aren't familiar with (also called Ironwood), is the park's fifth most populous native tree, with 101 in the inventory. The largest Eastern Hophornbeam tree in the metro area lies just east of the park in the Roanoke neighborhood at 1008 Valentine Rd. Coincidence? Eastern Hophornbeam is a small to medium sized tree with elm-like leaves and a seed cluster that hangs on the twigs through the winter and looks like hops. Birds don't love the seeds but will eat them later in the winter when other food sources are gone.

No ornamental pear trees were found in the inventory. Pyrus calleryana (commonly called chanticleer, bradford or callery pears are an emerging invasive problem with outbreaks along the Blue River in south Kansas City and in other wooded areas across the state. So far Roanoke Park has avoided this one although some smaller seedlings have been spotted.

No Flowering Dogwoods. Hmmm, we'd better plant some. Not more Cottonwoods (only 16) despite the six largest trees in the inventory being Cottonwoods. Probably due to the limited areas of the park suited to Cottonwood. Besides Flowering Dogwood, many other understory trees appear to be missing from the park, or were at least below the 3" trunk diameter cutoff used in the Inventory: Serviceberry, Buckeye, Blackhaw, Paw Paw, others? We do at least know where some Paw Paw exists above the brick road.