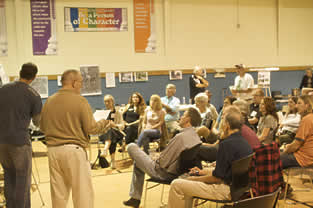 Read the Facilitator's Notes to learn more. Many great ideas were formed at the Charrette. As the journey toward a Master Plan continues, those ideas will be expanded upon, and refined. It's possible that some may not stand up to the scrutiny of expert advice and Parks Department approval.

Watch for the opportunity to participate in yet another informative discourse about the big dreams for Roanoke Park as the initial interpretation of the charrette results begin to emerge in broad stroke renderings by resident architects.