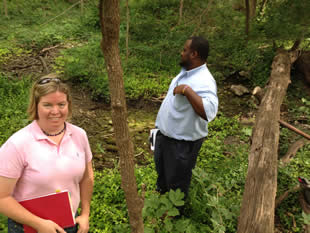 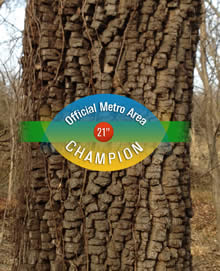 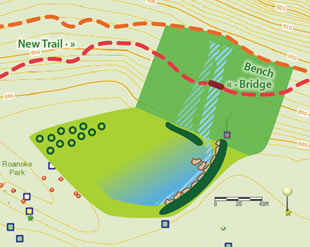 The Coleman Highlands Spring area plan. Click for a blowup and more information.During the winter of 2013-2014 the Roanoke Park Conservancy put together a proposal and applied for an Urban Conservation Grant from the Missouri Department of Conservation. As announced at or party at Prospero's Uptown Books in March, We won the grant! As a result, $3,500 from MDC will be combined with $1,500 of your donations, a couple hundred volunteer hours, and contributions from the Parks Department and ERTA to make the spring easier to visit, and more valuable to wildlife.

Clearing the area of shrub honeysuckle has mostly been completed. Next up is killing the carpet of non-native wintercreeper. The city is currently undertaking repairs to the sewer line running underneath part of the area at the bottom of the hill - to make sure we don't have a hole in the bottom of the bucket. Then the parks department will help us constuct a berm to concentrate and relocate the wetland pool at the bottom of the hill. All of this activity is to prep the area for a springtime planting event where over 770 native plant plugs will be installed. (You're invited.)

We hope to make it even better, but at a minimum the Colemand Highlands Spring project will include:

See the Spring Proposal Handout for more info and check back for more details.