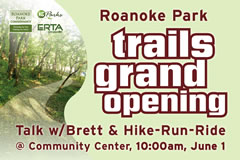 Of course many people have been enjoying the trails already as sections have been opened over the last year plus. But today was a special day to acknowledge National Trails Day and say Thank You to Brett Shoffner and Earth Riders Trails Association for building around Two Miles of Hiking / Biking / Nature Trails in Roanoke Park. Well Done! $645 was raised for ERTA as part of that Thank You, including $200 in matching funds from the Roanoke Park Conservancy.

"...Yesterday afternoon my family walked the trails for the better part of two hours. We had a blast. Here we sit minutes from downtown but also just a few hundred yards from an incredible nature escape. Thank you." - Brandon Boulware

TRAIL MAPS were handed out for Trail users new and old. Download your own here: Roanoke_Park_Trails.pdf We'll update the map periodically but keep it at the same link location.

Before the Grand Opening, Midtown KC Post posted an excellent article and interview with Brett Shoffner about the Roanoke Park Trails and the Grand Opening:
http://midtownkcpost.com/2013/05/29/have-you-hiked-the-devils-dip-roanoke-park-trails-open-saturday-9485

And followed it up with an equally excellent report afterwards including some great photos by Mike Sinclair:
http://midtownkcpost.com/2013/06/03/trails-opened-as-part-of-restoration-of-roanoke-park-9624

See you on the TRAILS!