A most authoritative and detailed account of Roanoke Park's history, from the book
A Legacy of Design: An Historical Survey of the Kansas City, Missouri, Parks and Boulevards System, 1893-1940
Janice Lee, David Boutros, Charlotte R. White & Deon Wolfenbarger, 1995 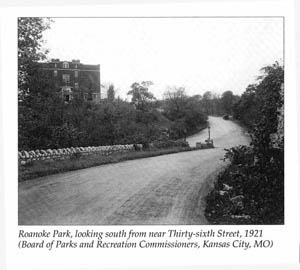 The Board of Park Commissioners acquired Roanoke Park during 1901 to 1923 in a series of seven gifts totallying 11 tracts of land. The Roanoke Park neighborhood was a prominent residential district containing a rugged strip of land that promised to be difficult to successfully develop. To prevent undesirable growth and protect property values, nearby landowners and developers donated land for the creation of Roanoke Park. The South Highland Land and Improvement Company donated the first and largest two tracts in 1901 and 1905.

Grading and sidewalk construction began in 1905. In 1906 the main roadway through the park (then Roanoke Road) was completed. It extended for 0.77 miles from its northern terminus at Karnes Boulevard to Thirty-eighth and Wyoming Streets. Thirty-eighth Street from Mercier Avenue to Wyoming Street was also completed in that year, as well as the entry markers at Madison Avenue and Thirty-sixth Street and at Valentine Road and Roanoke Boudvard, the stone steps and piers at Roanoke Parkway and Karnes Boulevard, and most of the stone walls in the park. In 1907 the park entrance at Thirty-sixth and Summit Streets was graded and sodded, shrubs were planted, and stone entrance markers were added. In 1909 and 1911, respectively, H. T. Abernathy, a neighboring property owner, and Mary T. Whiteside donated land for park purposes. Plans and specifications were drawn up for the construction of a brick block pavement on Roanoke Boulevard at Valentine Road in 1918.

In 1923 Wyoming Street at Thirty-sixth became park property. One block between Madison Avenue and Summit Street was also condemned for park purposes at a cost of $35,000 and became a park entrance. In 1932 a wading pool was constructed in the southwest corner of the park.

The park board approved the final plans and specifications for the Westport-Roanoke Community Center, designed by E.F. Pryor, in 1962. In 1971 the 0.3-mile section of Roanoke Road intersecting the park became park property, and the park board renamed it Roanoke Boulevard. The park board also designated the boulevard an historic landmark that year because it was the sole remaining brick road in the park system. A 1975 master plan for the redevelopment of Roanoke Park included the addition and improvement of playground and picnic equipment, fencing, curbs, sidewalks, and plantings. In 1978 the brick surface fo Roanoke Boulevard was restored with pavers comparable to the originals. Ten years later the boulevard was again restored and was extended southward to Valentine Road. Also in that year, a marker designating Roanoke Boulevard as a landmark was installed at the boulevard's south end.

Roanoke Park retains its integrity of location and setting, and most of its integrity of design, materials, workmanship, feeling, and association. The park retains the original property boundaries established through donations to the park board from 1901 through 1923. The setting of houses and small estates clustered around the bluffs overlooking the park has not changed since the early 1900s. The design authorship of Roanoke Park is unclear, but it resembles two other parks planned by George Kessler: Penn Valley Park and Hyde Park. The scenic narrow valley and wooded bluffs remain from the original design. Most alterations and additions have meen made in the same rough-limestone vernacular design and construction of the original, except for the modern community center building.

Roanoke Park is significant in the area of landscape architecture as an example of the "natural" style of park design. It possesses design characteristics typically associated with the master landscape architect George Kessler: fluid grading, winding drives, diversified plandings massed and intermixed in natural-looking meadows and woodlands, and rough limestone walls, steps, and park entrances. The adaptation of the park's built features to the rugged terrain reflects the skills of the designer.

In community planning, Roanoke Park is significant as an example of a large community park providing focus and a social center for its neighborhood. The park's history illustrates the integral role of private donors in consolidating the original land gifts. As in Hyde Park, residents and developers controlled and/or improved the quality of adjacent development in order to protect land values.