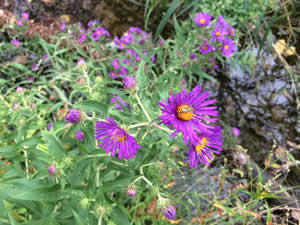 2015–2016 progress in the Coleman Highlands Spring

This spring and the surrounding area are one of are one of Roanoke Park's special treasures. Efforts to improve the area for all its residents and visitors (two legged and otherwise) are ongoing and evolving. This article tracks the progress through 2015 and 2016.

Read about how an MDC Habitat Grant was awarded to the project for background and initial plans.

Throughout the latter half of 2015 (after the planting), Chris DeLong kept the site weeded by pulling the unfortunate infestation of barnyardgrass that threatened to overwhelm the plantings in the wetland area. Our friends at Taylor Creek Restoration Nursery say that the barnyardgrass should reduce over time. Let's hope.

Most of the plants installed in May appeared to thrive. The area southwest of the deeper pool turned out to stay much wetter than expected, so not all of the "medium moisture" plants put there did well. The more successful plants included the pickeralweed, cardinalflower, blue lobelia and mistflower. The nodding bur marigold that was already there put on a show of yellow flowers. One of the swamp milkweed plants even bloomed, which was exciting for year one.

More park visitors began making the site a stop on their ramblings through the park. Unfortunately many saw fit to walk straight up and down the hill adjacent to the spring, limiting the growth of plants in that area. (Please Leave No Trace and Stay on the Trails.)

The spring continued to be visited by a great many birds. A pair of mallard ducks called it home in the springtime and a great variety of birds were drawn in by the water, and the many insects buzzing around.

Staying semi-green through the mild 2015-2016 winter were the irises, clumps of smooth rush, many of the sedges, and the golden ragwort (which appears to have reseeded itself rather freely.)

Brett Shoffner is putting more work into the trails at the spring source, making a more sustainable rock path where the trail on the lip of the hill crosses the spring water. Again, please stay on the trails to protect our new plantings. (If it will stop raining, Brett should be back to finish it up soon.)

On April 16 a few volunteers came to help weed the area next to the old road bed. The wintercreeper from which the area is being reclaimed was pushed further back from the wetland and spring source areas. This will be an ongoing project.

156 more plants were planted into the spring area between April 23 and May 14th, including:

On April 23 a group of volunteers came from the local global anti-poverty charity Unbound, including Coleman Highlands resident and long time park helper Paul Pearce. They planted the 90 field pussytoes and the two pawpaw trees then headed over to the adjacent Grocer's Warehouse area to plant 25 fragrant sumac, and 20 virginia creeper.

The Rockhurst High School Ecology Club joined Chris DeLong and Missouri Master Naturalist Kate Roos on May 14th to plant the wild ginger, pickeralweed and swamp milkweed. Then the group headed over to the Grocer's Warehouse area to plant 200 bottlebrush wildrye native ornamental grass plugs. (Matt G. from Hufft ran a cord out to us so we could drill holes using a power drill and planting auger.) Kate did a masterful job supervising the weeding of the spring source area and planting the wild ginger. RHS ecology club leader and biology teacher Heidi Kuster was very excited to return to the spring in the future for more learning with her students. (And to play in the park since she lives nearby.) 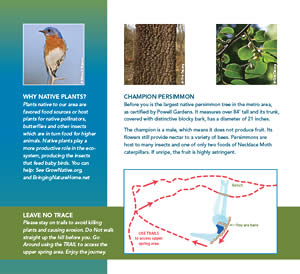 One of three signs installed in the area. Click for a blowup gallery of all three signs.

Interpretive signage was installed on site this spring as required by the MDC grant. See the gallery at left. Thanks to KCMO Parks for producing and installing it.

A bonus sign regarding the geology of the park and the spring was installed near the park bench at the top trail. Thanks to Dr. Gentile from UMKC for consulting on this sign to make it as accurate as possible.