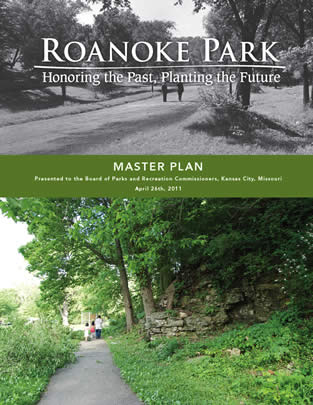 The full Master Plan document is viewable and downloadable on Scribd: http://www.scribd.com/doc/54081928/Roanoke-Park-Master-Plan

The submitted document also included this foldout, replacing pages 41-42 in the above 8.5x11 only version: http://www.scribd.com/doc/54080750/RP-Master-Plan-Foldout

Articles can be found in this section of the website detailing the Master Plan creation, including the Park Planning Charrette, Notes from the Charrette, the Neighborhood Survey, and Master Plan Approved articles.

An article with some explanation can be found here: http://roanokeparkkc.org/plans/master-plan/153-let-s-talk-ecological-restoration-master-plan 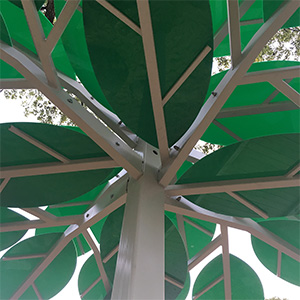 It's in! The installation is complete of an artistic shade structure at the Karnes playground in the park. The piece 100% privately funded and was a cooperative effort designed by Rie Egawa + Burgess Zbryk (egawazbryk.com, instagram: @egawa_zbryk) and crafted at Hufft. The installation itself was donated by Kissick Construction. Of course Kansas City, MO Parks and Recreation approved the project at all stages. (These photos by @egawa_zbryk and Hufft workshop manager @sgb73 on Instagram.)

The piece it the fruition of a design competition held last year. (It was originally conceived as sitting atop the main mound in the playground, but that concept went away very early by consensus view of the architects, designers and construction professionals that weighed in.) 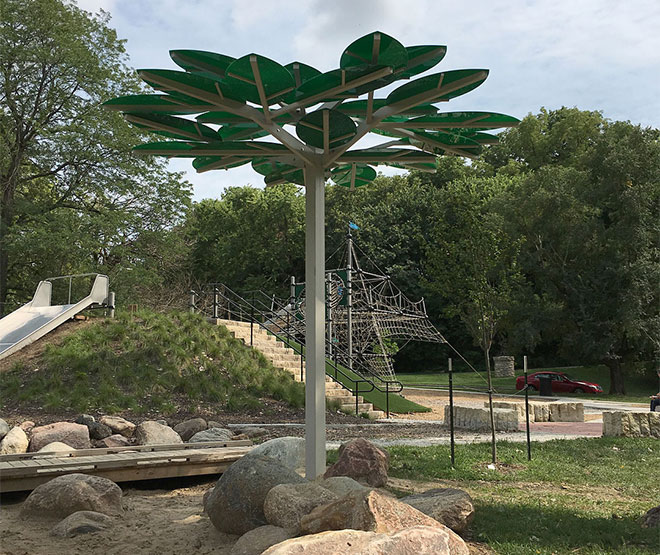 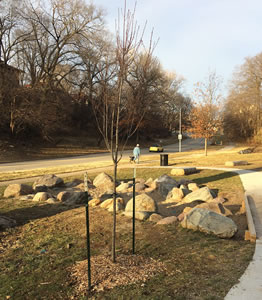 Click for a popup gallery of images of our new trees!

New trees are being planted in the park, at the Karnes playground and the sledding hill.

The Karnes playground has been a huge hit for Roanoke Park and its visitors. One complaint that has been heard however is that there can be a lack of shade on sunny days and the equipment can get quite hot. To address that concern, the Roanoke Park Conservancy's playground committee requested this past fall that more trees be planted by the parks department. Rachel Porter, Lance Klein and Chris DeLong worked together to pick the most desirable trees from the city's "contract planting list." Two fast growing and tall trees were chosen for the south side of the playground, where they could provide the most shade in the fewest number of years: a Northern Red Oak, and a Tuliptree (Tulip Poplar). A Sugar Maple was planted not far from the swing set, a Black Tupelo near the "council ring," and a Serviceberry near the boulders and sand. Lance's plan also calls for a White Oak closer to Karnes and a Caddo Maple north of the playground, but those have yet to be planted. Most of these selections are Missouri native trees with high wildlife value and all are handsome trees. We can hear the birds singing already!

Additionally, Lance and Chris requested that more trees be planted to replace those that have fallen or are in declining condition around the "sledding hill" west of Karnes. Two of those have already been planted, both Bur Oaks. North of the small blue swingset, a Bur Oak fell a couple years ago and you can still see the trunk and up-ended roots. Then recently a large White Oak fell not far away, blocking the trail until its rotted trunk was chain sawed out of the way. The trees on either side of the blue swingset are White Oaks that appear to be in decline. Lance and Chris requested that "replacement trees" be planted now near those two. Also requested was a Chinkapin Oak near Karnes, near where the stump is still visible from one of the parks old sentries that came down in 2011-12.

New Trees in the Park

White Oak, Quercus alba — 60-90’ tall. The park needs more of them since our largest ones are not in great health. Wide canopied large trees with deeply divided leaves and large acorns.

Sugar Maple , Acer sacharum 'Legacy'— 40-80’ tall. Dense shade and shallow roots tend to prevent grass from growing beneath them. Gorgeous fall color (see the big one north of Karnes, east of the spring).

Tuliptree, Liriodendron tulipifera — 60-90’ tall. Fast growing. Not very valuable to wildlife. Not native to our part of the state but grows well. Attractive blooms.

Trees for the sledding hill include White Oak (detailed above), and...

Bur Oak, Quercus macrocarpa — 60-80’ tall. May be slow growing but grows into a large muscular tree. The twigs, often with corky bark extensions, are thick to support the golf ball sized acorns (largest of all oaks).

Chinkapin Oak, Quercus muhlenbergii — 40-60' tall. Most common oak in the park. Not as tall or fast growing as red oak, but has a beautiful semi-open wide crown and ‘gnarly’ branches. Squirrels go into a feeding frenzy on the acorns and gobble them into bits. Very long lived. (Chinkapins on Blue River Glade near Swope Park have been dated at over 200 years old. The larger ones in Roanoke Park are almost certainly as old.) 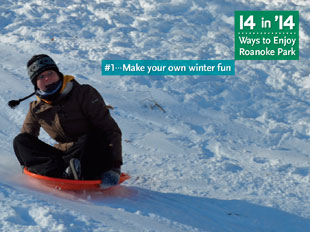 Just ONE way to enjoy Roanoke Park in 2014. Click for the rest of the 14 in '14 gallery.About 85 adults (plus a few of their kids) had FUN and got an update on the NEW Playgrounds in Roanoke Park at this free event. Decorating the windows were fourteen ways to have fun in Roanoke Park in 2014. Check out the 14 in '14 gallery here or on facebook.com/RoanokeParkKC. All enjoyed the free food and drinks, socializing and listening to some great music afterwards. Several exciting announcements were made:

RPC board director Scott Burnett got it started by thanking those who made the event possible: Prospero's Uptown Books, Papa Murphy's Pizza, Boulevard Beer, Shannon and the Rhythm King Band, and the many Roanoke Park Conservancy (RPC) volunteers and donors. 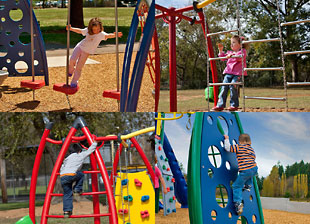 Here are images of the new playsets we'll be receiving. Click for a blow up. (©gametime.com)RPC board secretary Randy Moore outlined just a few of the positive steps our donations, hard work and City cooperation and funding have made possible in Roanoke Park as part of the long term Master Plan: removing tons of shrub honeysuckle, building new sidewalks and stairs, building the Bio Swale and (getting the most applause,) the Trails. He also announced a couple of new Master Plan items to look for in 2014. Better pedestrian lighting is to be installed to complement the new sidewalks. Also on the lighting front, the big bluff columns at the intersection of Karnes and Roanoke Boulevard will be enhanced with some tasteful up-lighting.

RPC Playground Task Force leader Rachel Porter gave an update on plans for replacing the north playground on Karnes with a creative and innovative playground as conceived by the Playground Charrette in January. She announced that $75,000 in PIAC money was officially earmarked for the project, giving the fundraising for this endeavor a major kick start. Rachel called up Gavin Snider of Hufft Projects to note how Hufft and the task force continue to develop plans for this playground.